By Naval Drones - September 30, 2012
A constant tit for tat churn in weapons technology has pervaded the history of warfare in many forms: English long bows vs. chain mail armor; carrier-based aircraft vs. dreadnaughts; home-made fertilizer explosives vs. MRAPs, just to name a few.  Used creatively in the hands of a determined foe, both archaic weapons and more high technology systems can overwhelm even the most modern naval defenses.  Relatively affordable sea mines, anti-ship cruise missiles, and diesel submarines have proliferated at a startling rate to emerging countries and non-state actors.  The quantities of these weapons globally present a real threat to sophisticated navies, who struggle to keep up procurement rates of ever-more expensive modern combatants and weapons systems in a time of defense austerity.  Unmanned naval systems represent an opportunity to reverse this asymmetry once again. 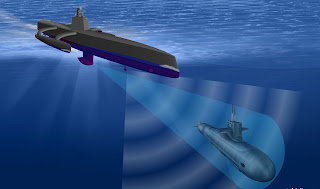 The cusp of this reversal is evident in recent developments in three important areas of naval warfare.

Mine clearance operations are slow and dangerous.  This past week in the Middle East, several navies demonstrated the efficacy of large numbers of unmanned underwater vehicles in mine hunting and clearing operations.  Although a number of traditional mine-hunting ships participated during IMCMEX, many of the simulated mines were found and neutralized with AUVs operated from zodiacs and other small boats launched from amphibious mother-ships.  This combination of systems -- small boats and AUVs -- is affordable and rapidly deployable by air, providing navies facing mine fields with time and space to allow for the arrival of slower mine sweepers.

The Aegis air defense system has demonstrated amazing capabilities against aircraft, cruise and ballistic missiles, and even satellites, but the technology is limited against saturation attacks simply by a ship's magazine capacity.  Directed energy weapons may one day handle the lopsided number of anti-ship attackers.  Could naval drones someday present another alternative for missile defense?  In the video below, three quadrocopters act in concert to throw and catch a small ball using a net.  Could future missile defense systems use small, highly-coordinated UAVs to "catch" incoming missiles with sticky nets or some other mechanism?  A missile traveling at Mach+ speeds doesn't necessarily need to be destroyed, just aerodynamically destabilized.