Showing posts from November 4, 2012
Show all 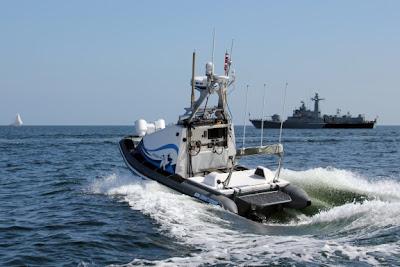 Although the Polish Navy operates a range of remotely operated vehicles today, there is no yet publicly known autonomous vehicle in operation.   The situation is quickly changing, though.  Three AUV systems planned for mine-hunting use on future patrol ships were mentioned in the Navy's last modernization plan. Additionally, General Skrzypczak, responsible for modernization programs in the Ministry of Defense, recently discussed MoD interest in Unmanned Surface Vessels for port protection and surveillance. These craft are expected to have some limited offensive capability. Not surprisingly, during a visit at this year's Euronaval convention, the Israeli company Rafael introduced the Polish delegation to its latest up-armed version of Protector .  Later it was reported that after the exhibition, an agreement for potential technology transfer between companies (not mentioned by name) was signed. It is an important indication of rapid improvements coming in this long neglected ar
Post a Comment
Read more...

The Next Wave - Swarming Underwater Drones

Experimentation with large numbers of low cost quadrotors operating in swarms has produced some interesting results, including potential for future military applications.  Now some researchers in Germany are working to transition these concepts to the underwater realm, building autonomous underwater vehicles (AUVs) that behave like fish in a school.  A team at the University of Luebeck's Institute of Computer Engineering has developed an affordable AUV designed for environmental surveys called MONitoring System and Underwater Navigation Robot (MONSUN ) II. ﻿﻿﻿MONSUN II is a 4 kilogram AUV equipped with a series of vertical and horizontal thrusters to maneuver and maintain orientation.  The vehicle maintains its position relative to other AUVs in the school using infrared sensors and a nose camera with a form of computer image recognition called "blob detection."  The swarming technology demonstrated by MONSUN vehicles is designed to overcome several of the limiting
Post a Comment
Read more...
More posts