This Month in History - RPV Targeting During Desert Storm 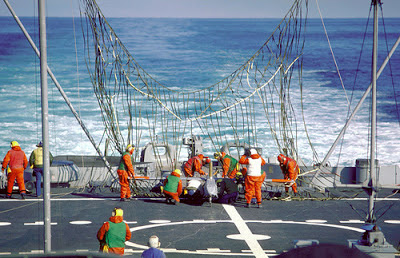 The U.S. military takes unmanned air vehicles for granted as they have been ubiquitous over the battlefield for the past decade.  But it wasn't too long ago they UAVs were an unproven novelty in combat.  The Naval History and Heritage Command  website has chronicled the myriad of ways that remotely piloted vehicles operating off U.S. battleships were used to support Navy and Marine Corps operations during Desert Storm this month 22 years ago. RQ-2 Pioneer UAV after recovery in the catch net device on the fantail of the battleship USS Iowa BB-62. (Official USN Photo) On 3 February, RQ-2A Pioneers from the USS MISSOURI (BB-63) were used for the first time to spot naval gun-fire when the ship "fired eight 1.25-ton shells from its 16-inch guns at prefabricated concrete command and control bunkers Iraq was moving into Kuwait, destroying the bunkers. The barrage, totalling 18,000 pounds of high explosives, marked the first combat firing of the MISSOURI's 16-inch guns si
Post a Comment
Read more...
More posts