﻿ S-100 Camcopter on DCNS Landing Grid (DCNS Photo)   Unmanned systems have not been excluded from China's rapid naval expansion and modernization program.  Last month, China's State Oceanic Administration (SOA) announced it would establish a string of UAV surveillance and monitoring bases in provinces along China’s coastline by 2015.  The SOA will also use drones to increase surveillance of the disputed Diaoyu (Senkaku) Islands in the South China Sea.  In keeping with this announcement, China Maritime Surveillance (CMS), a law enforcement agency under control of SOA responsible for law enforcement within the PRC's territorial waters, exclusive economic zones (EEZ), and shores, awarded two contracts  this week to the French DCNS Group.  CMS will purchase landing grids for two planned CMS 1,500 ton off-shore patrol vessels to be delivered in 2013.  The DCNS landing grids allow helicopters and vertical take-off-and landing (VTOL) UAVs fitted with a harpoon to land or
Post a Comment
Read more...

What You Can’t Find… 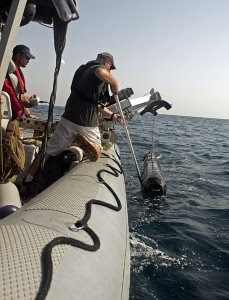 A frequently cited fact in my days training to be a naval officer was that the most common weapon for damaging a warship since World War II was the naval mine . The recently concluded International Mine Countermeasures Exercise 2012 (IMCMEX 12), held in 3 distinct OPAREAs throughout the U.S. Fifth Fleet Area of Responsibility (AOR), demonstrated both the difficulty of mine countermeasures (MCM) operations (detecting and clearing mines) and the potential of new technology to mitigate those dangers. PBS’ News Hour quotes a retired naval officer and observer of the exercise, Capt. Robert O’Donnell, stating of the 29 simulated mines in the exercise, “I don’t think a great many were found…It was probably around half or less.” The response from the Navy is a little confusing: The Navy declined to provide data on how many practice mines were located during the two-week naval drill but did not dispute that less than half were found. However, a spokesman insisted that the figures do
Post a Comment
Read more...

As the recent Israeli shootdown of a Hezbollah UAV reminded us, it is relatively easy to destroy an unmanned aircraft. But what about the proliferating numbers of unmanned undersea vehicles?  The growth in these systems for naval applications will inevitably result in the requirement to counter an adversary's underwater drones.  Detection of a small man-made object moving underwater is not trivial, but also becoming easier with the advent of technologies such as high-resolution imaging sonars and Light Detection And Ranging (LIDAR) systems. However, once an AUV is detected, how can it be destroyed?  This problem set isn't new. Mini-subs and combat swimmers have threatened ships in port since World War II.  The old school way of dealing with frogmen is to drop a concussion grenade over the side of a boat.  Alternatively, some navies have experimented with  dolphins  to counter swimmers.  These sorts of mammal-based systems could conceivably be trained to work against AUVs.
Post a Comment
Read more...
More posts