Inspector Gadgets: Drones in the Hangar

Checking an aircraft for damage can be arduous and meticulous work,  but last week’s issue of  The Economist   highlights  an experimental commercial approach. In simple terms, the Remote Intelligent Survey Equipment for Radiation ( RISER ) drone is a quadcopter with LIDAR and forms the basis for a system to use lasers to automatically detect damage to airliners. The obvious naval application for inspector drones would be for ground-, carrier, and surface vessel-based fixed-wing and helicopter units, although the configurations for each aircraft type and location might make some more practical than others. For example it probably makes more sense to consolidate expertise in inspector drones at regional maintenance and readiness centers than to try to outfit a unit in the small helicopter hangar of every destroyer. But there’s always something to be said for an operational capability. While  The Economist  notes that the drones are allowed at Luton airport, UK, to “operate only
Post a Comment
Read more...

Airborne Over The Horizon Targeting Options to Enable Distributed Lethality 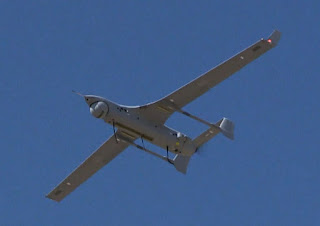 This article was submitted by guest author Michael Glynn for CIMSEC’s Distributed Lethality week.  Reprinted with permission from the Center for International Maritime Security. The Navy’s surface warfare community is committed to remedying its lack of anti-surface warfare (ASuW) punch with Distributed Lethality. “If it floats, it fights,” is the rallying cry.[1] Dispersed forces operating together pose challenges for an adversary, but also create targeting difficulties we must solve. The detection range of shipboard sensors is limited by their height above the waterline and the curvature of the earth. Since it appears doubtful leaders would call on a ship to steam into visual range of adversaries, airborne assets are most likely to provide over the horizon (OTH) targeting. In a January 2015 article in Proceedings, Vice Admiral Rowden, Rear Admiral Gumataotao, and Rear Admiral Fanta reference “persistent organic” air assets as key enablers of Distributed Lethality.[2] While a c
Post a Comment
Read more...

The following is a submission by guest author Chris O’Connor for CIMSEC’s Distributed Lethality week, reprinted with permission of the Center for International Maritime Security . Distributed lethality is a concept that harkens back to the glory days of the US Navy in the age of sail: small groups of ships with operational autonomy fighting the enemy with their organic firepower and capabilities. Operational autonomy was the default state for ships  until Marconi’s radio set--the lack of instantaneous communication meant that commanders had to make decisions by themselves. Concerning distributed lethality, the lack of communications is imposed upon our ships by enemy communications denial in an A2/AD environment. The parallel does not work in the logistics domain as well- warships then had to fend for themselves logistically, while today, we will have to force a new mode of supply on our ships in order for them to operate independently. There are some lessons we can learn from ho
Post a Comment
Read more...
More posts