by CAPT (ret) Wayne P. Hughes, Jr., USN, Professor of Practice, NPS, whughes(at)nps.edu Read Part I Here TACTICS AND TECHNOLOGIES In November 2010 the Naval Institute published its robotics essay contest winner, “ How to Fight an Unmanned War ,” by Lieutenant James E. Drennan, a student in the Systems Engineering Analysis curriculum at the Naval Postgraduate School. It is a brilliant piece, not least because it is oriented around tactics. Drennan answers the who, where, when, how, and why questions of combat that incorporates robots. A runner up in the competition is on the Naval Institute web site: “ Our Own Worst Enemy: Institutional Inertia and the Internal Challenges of Embracing Robotics ” by a former Marine, Nathan Hughes (no relation). He contends that the greatest resistance to the development and deployment of robotic systems is neither in the research and development community nor outside the Department of Defense. It is systemic within DoD, created by “a ro
Post a Comment
Read more...

Mine Warfare Unmanned Systems: US Allies are Moving Forward 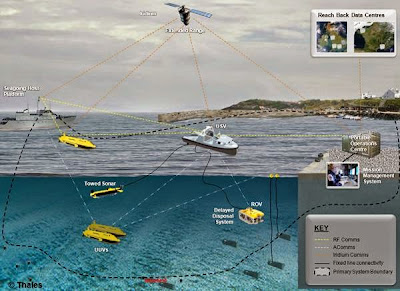 By Dr. Franck Florin, CRUSER Member, VP International Technologies, Thales Defense & Security Inc. During World War II, mines emerged as a major weapon and the British, German and American navies placed more than 215,000 mines in the seas (according to Chris Henry, Depth Charge, 2005). To date, despite constant clearing effort, more than 60% of the mines and unexploded ordnance from that period are still lying on the sea bed near European harbors and along major European navigation channels. In 2012 alone, the French Navy neutralized a total of 2,292 explosive devices in the country territorial waters (50% in the Channel between France and UK, 30% in the Atlantic and 20% in the Mediterranean Sea). With tens of thousands of unexploded ordnances to clear and many international operations abroad to support United Nations peace keeping and NATO crisis management, the European navies need cutting edge technologies to support their Mine Warfare (MIW) effort. This was recognized by t
Post a Comment
Read more...
More posts