Last winter over at Information Dissemination , I made the observation that swarming robots will irreversibly transform warfare, and I hold to that argument.   The discussion and progress in this area is developing quickly.   Much of this conversation involves non-military uses for drone technology, but as with many tools, there are also applications for warfare.   A host of militarily-useful scenarios can be envisioned to employ very small unmanned naval platforms in a non-lethal fashion. In the videos below, quadrotors are used to perform simple construction tasks. The technology that is today viewed as modern performance art could some day be utilized to build an expeditionary forward operating base remotely.  A C-130 would fly over a likely FOB site and deploy hundreds of UAVs, which would quickly go to work filling Hesco Barriers and building fighting positions all night long based on a pre-programmed design, a scoop of sand at a time.  Out of power, the drones could then land o
Post a Comment
Read more... 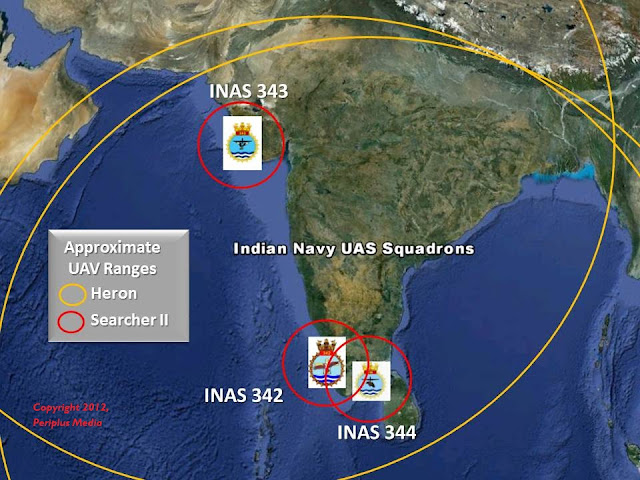 India has one of the world’s largest Navies, with bluewater responsibilities and more than 7,500 kilometers of coastlines and hundreds of islands to patrol.   Besides the ever-present concern of Pakistan and China looming to the east, the Navy keeps busy supporting international counter-piracy efforts and protecting her coastlines from terrorist operatives such as LeT, who infiltrated via the sea to attack Mumbai in 2008. With a 2012 budget just shy of $6.5 billion USD, the Navy makes up only 20% of India’s overall defense expenditures.   Nevertheless, unmanned systems appear to be an important component of the Navy’s ongoing modernization efforts to upgrade and from outdated Soviet-era platforms.   India’s Navy reportedly has over 100 Unmanned Aerial Vehicles (UAVs) flying since 2003 and deployed with three squadrons.   These aircraft will complement twelve manned P-8I Neptune maritime patrol aircraft entering service in 2013. Earlier this year, some of these UAVs participated in T
1 comment
Read more...

By Naval Drones - August 28, 2012
NOAA recently deployed a Liquid Robotics Wave Rider to help track hurricanes in the Atlantic. The robot, called Alex, has operated on the fringes of hurricane Isaac, and has sensors to gather data on surface winds, barometric pressure, and wave characteristics.   Alex joins the other autonomous vehicles in NOAA’s fleet ( see live data feeds here ).    Wave Glider Video from AUVSI 2012 (courtesy Liquid Robotics) In addition to collecting oceanographic data, these types of USVs may someday serve as affordable naval intelligence, surveillance, and reconnaissance (ISR) platforms.   The technologies required to autonomously operate for long periods at sea, recharge batteries via solar panels, collect oceanography data, and transmit that data thousands of miles is directly applicable to ISR missions.   The miniaturization of sensors will enable platforms like the Wave Glider to conduct long range duration intelligence collection patrols that are currently conducted by ships and sub
Post a Comment
Read more...

By Naval Drones - August 26, 2012
Unmanned aerial systems have delivered affordable intelligence, surveillance, and reconnaissance (ISR) capabilities to smaller naval vessels that were previously unique to much larger platforms. In the past decade, small tactical unmanned aerial systems (STUAS) have enabled ground and sea forces operating in the Philippines, Southwest Asia, and Africa to see over the next ridgeline or island, well beyond their line of sight. The introduction of wireless power transmission will add yet another capability to the utility of these naval drones. Lockheeed Martin Skunkworks and Kent, Washington-based company Lasermotive recently demonstrated the ability to recharge the batteries of small, electrically-powered unmanned aircraft in-flight, radically extending the endurance of these tactical drones. In July 2012, a Stalker UAV powered by laser transmission flew for 48 hours in a wind tunnel. As a point of comparison, the normal endurance of this drone is only 2 hours, a difference of 24
Post a Comment
Read more...