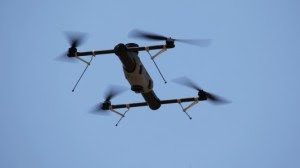 Much of the conversation surrounding the advent of naval drone warfare has focused on those platforms performing the more ‘kinetic’ types of warfare – anti-submarine warfare, surface warfare, air warfare – and those of the voyeuristic surveillance variety. However, a quick look at the composition of the carrier air wings of the U.S. Navy or the dispersed air units of a land campaign reminds us that supporting elements such as electronic warfare and command and control (C2) remain an integral part of modern combined operations. While it may not be as “sexy” as the ability to deliver a missile on target, the ability to maintain battlefield communications is arguably more important as it is an enabler of nearly all other actions.   In January, The Aviationist described the U.S. Air Force’s reiteration of the importance and utility of airborne assets providing communications by developing a new line-of-sight system: The U.S. Air Force is trying to turn the targeting pods carrie
Post a Comment
Read more...

As  discussed in an earlier post , dynamics between unmanned naval systems and the platforms that carry them are changing rapidly to accomodate new technologies and tactics.  Arguably, various types of drone motherships have the potential to transform mine countermeasures more than any other warfare area and the evolution in mine-countermeasures tactics towards the mothership-unmanned underwater vehicle (UUV) partnership is already underway.  One of the first major demonstrations of this concept occurred last summer during 5th Fleet's International Mine Countermeasures Exercise ( IMCMEX ) when a number of UUVs were tested from large amphibious motherships including USS Ponce ((AFSB(I)-15). Essentially, the Navy is moving from dedicated MCM ships such as the Avenger class minesweeper, to a trio of platforms: a Generation I mothership, carrying Generation II platforms (a RHIB specially modified to carry UUVs; seen below), and the UUVs themselves. The Gen I mothership provides th
4 comments
Read more...
More posts