Drones and the Human-War Relationship

Robots fascinate humans. They abound in movies: Star Wars, the Terminator, the Matrix. They are a foil for the human condition. In rosy predictions they are like Star Trek’s Data, “perfect” in strength and intellect yet void of emotion. In dystopian futures, killer robots are poetic justice. Created by humanity, robots attempt to annihilate their creators. If told killer robots exist in the U.S. arsenal, most Americans would probably think of “drones.” The name sounds robotic; it implies automaton behavior. Drones lack an onboard crew, and just like robots, drones fascinate Americans. In one important way, however, drones are not robots: they are flown by humans; they are just flown by remote control, but this creates a problem all of its own. The Armed Forces are not even sure how to deal with drone pilots. The pilots play a pivotal role in combat operations. They make life or death decisions. They press the button to fire missiles. They probably engage in more “lethal actions” th
Post a Comment
Read more... 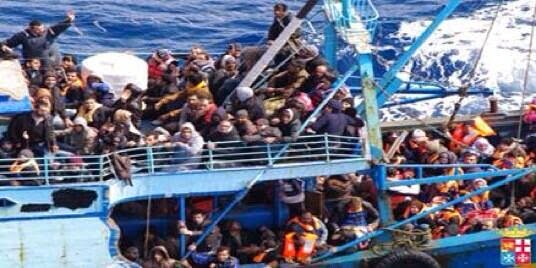 Migrants rescued by the frigate Maestrale. Image courtesy Marina Militare. Hardly a single naval mission area remains that has been untouched by unmanned systems of the air, surface, or undersea variety.  Most recently, Italy's navy announced that with the help of surveillance from an unmanned air system, 1,049 African migrants en route to Sicily had been rescued.   The ongoing rescue missions are part of Operation "Mare Nostrum"(Our Sea), which has been underway since last fall when over 400 migrants from Eritirea and Syria perished near Italy's coasts. Presumably, the drone the Italians referenced was the ScanEagle, which was initially evaluated for ship-board use in October 2010. Two systems each consisting of 5 fixed-wing aircraft were purchased to be employed by the Maestrale Class Frigate beginning this year.  The Italians also recently acquired the  S-100 Camcopter , intended for counter-piracy duties in the Indian Ocean.
Post a Comment
Read more...
More posts