by Kenneth Stewart, NPS, kastewar(at) nps.edu  Students and faculty from the Naval Postgraduate School (NPS) and the U.S. Naval Academy (USNA) recently came together with teams of junior officers from U.S. Navy Third Fleet to discuss the ethics of unmanned systems for the 2015 iteration of the Robo-Ethics Continuing Education Series. This year’s event was led via video teleconference by NPS Associate Professor Ray Buettner, April 14. “We are interested in exploring the ethical boundaries of robotic systems … preparing tools to figure out what the future will be like,” said Buettner. But as student and faculty researchers wade into the at-times turbulent waters of unmanned systems, they are also exploring the many ethical considerations that autonomous combat systems present. “Should a machine be able to decide to kill, and if so, what does ‘decide’ mean?” Buettner asked assembled students and others joining via video teleconference from USNA and elsewhere. “The key concept to co
Post a Comment
Read more... 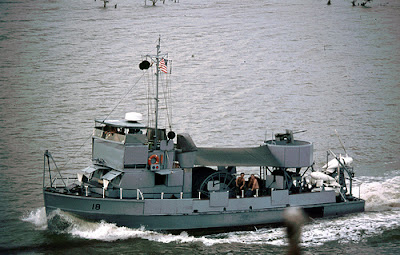 Navy Minesweeping Boats (MSBs) cleared mines and fought their way through Vietnamese waters. Sea mines are simple, affordable, and prolific, yet one of the most lethal weapons of naval warfare in the past 50 years.  Countering this threat remains a significant challenge for even the most advanced navies. The eleven remaining Avenger class Mine Counter Measures ships in the U.S. Navy's fleet are divided between two forward deployed home ports, Bahrain, and Sasebo, Japan.  These single purpose ships will be gradually phased out in favor of new unmanned, off-board mine clearance technology embarked on a variety of platforms, such as the Littoral Combat Ship.   The Navy is also planning for smaller craft, such as the MK VI patrol boat to carry Unmanned Underwater Vehicles (UUVs) for mine clearance.  During the early days of Operation Iraqi Freedom, the Navy utilized small UUVs launched from the shore and inflatable zodiacs to find mines in Iraq's rivers. More recently, inte
Post a Comment
Read more...
More posts