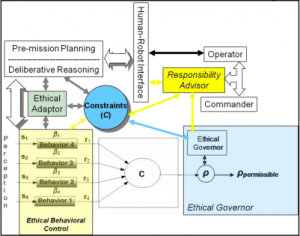 Guest post written for UUV Week by Sean Walsh. Should robots sink ships with people on them in time of war? Will it be normatively acceptable and technically possible for robotic submarines to replace crewed submarines? These debates are well-worn in the UAV space. Ron Arkin’s classic work  Governing Lethal Behaviour in Autonomous Robots  has generated considerable attention since it was published six years ago in 2009. The centre of his work is the “ethical governor” that would give normative approval to lethal decisions to engage enemy targets. He claims that International Humanitarian Law (IHL) and Rules of Engagement can be programmed into robots in machine readable language. He illustrates his work with a prototype that engages in several test cases. The drone does not bomb the Taliban because they are in a cemetery and targeting “cultural property” is forbidden. The drone selects an “alternative release point” (i.e. it waits for the tank to move a certain distance) and then
Post a Comment
Read more... 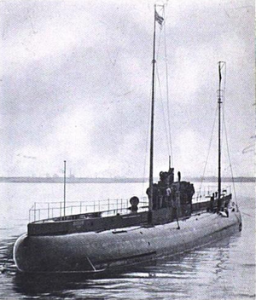 Guest post for UUV Week by  Steve Weintz. As potential adversaries sharpen their abilities to deny U.S. forces the freedom to maneuver, they concurrently constrain America's traditional strength in supporting expeditionary power. Sea-bases bring the logistical "tail" closer to the expeditionary "teeth," but they must stay outside the reach of A2/AD threats. Submarines remain the stealthiest military platform and will likely remain so for some time to come. In addition to their counter-force and counter-logistics roles, subs have seen limited service as stealth cargo vessels. History demonstrates both the advantages and limitations of submarines as transports. Submarine troop carriers, such as those used in SOF operations, are distinct from submarine freighters; the submarine's role in supply and sustainment is addressed here. Unmanned Underwater Vehicles (UUVs) will revolutionize minesweeping, intelligence collection, and reconnaissance. But they may als
Post a Comment
Read more... 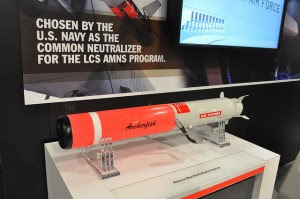 Guest post by Terry Miller, Capt, USN Retired and John Rapp. A covert, in-mission, full kill chain, integrated, Mine Warfare Autonomous Underwater Vehicle (AUV) is described. It will significantly compress the kill chain beyond today’s overt detect to engage methods. It also eliminates or reduces costs associated with today’s multi-system approach. Over time, the MCM practice will inevitably evolve from overt to covert: this natural transition is discussed. The Navy asserts that time line improvements are urgently needed, but equally important is improved affordability. Cost savings for the integrated AUV are expected to be less than $5K per mine kill. The paper describes sign ificant potential to reduce system costs using an integrated AUV solution instead of the multi-system approach of RMMV, AQS-20 and Archerfish. S uch an AUV includes the vehicle itself, with its associated power and propulsion and maneuvering systems, autonomous embedded intelligence, navigation system, sonar
1 comment
Read more...

Well known authors and national security analysts Peter W. Singer and August Cole have together launched their inaugural novel, Ghost Fleet . The book contains all the components one would expect from a high tech future-war thriller: major power conflict, cyber militias, and biotech-enhanced warriors, to name a few highlights. And drones...lots of them.  Unmanned naval systems in particular, play key roles throughout the book's action sequences. Some of the unmanned systems are already deployed, some are currently in development, and a few exist only in the authors' minds, but all appear to be technically feasible at some point in the near future. A Littoral Combat Ship features prominently early in the plot. The LCS serves as a mothership for the  Fire Scout UAVs and a REMUS AUV which the crew creatively uses as an offensive weapon. An embarked SAFFiR robot helps LCS sailors with damage control during a combat scene. Several platforms in use today are adapted for new m
Post a Comment
Read more...
More posts