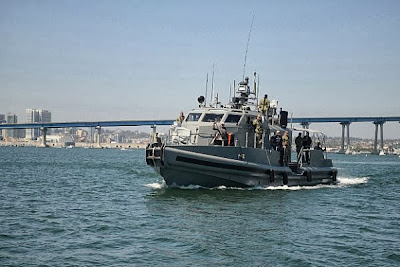 ﻿ The U.S. Navy recently introduced the new 65 foot Coastal Command Boat (65PB1101) into the fleet.  Among other maritime security missions, CCB will test new concepts in employing unmanned underwater vehicles.  The one-of-a-kind vessel was developed following a 2008 Congressional earmark for $5 million.  After a transit from its building location in Bremerton, the SAFE Boat-manufactured CCB arrived in  Coronado, California in August where it been assigned to Coastal Riverine Group 1 (CRG-1).  CCB is a predecessor of the Navy's upcoming 85-foot Mark VI patrol boats, six of which have been planned for delivery in FY13/14.﻿﻿
The boat has been configured to operate the MK 18 Mod 2 Kingfish UUV for mine counter-measures operations.  Two of the 800 pound, 12 inch diameter UUVs sit in cradles on the stern of the CCB and are launched with the boat's hydraulic crane.  The Navy is considering deploying the CCB to the Middle East for operational testing sometime in the next year.  Oper…
Post a Comment
Read more...
More posts