Hybrid Drones - the Advantages of Operating in Multiple Domains 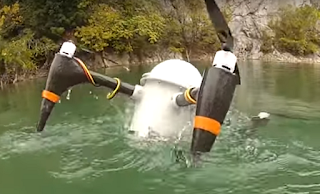 Classifying unmanned maritime systems by their operating domain: air, surface, or underwater - is both convenient and intuitive. But recently, navy and industry researchers have begun to explore the advantages of platforms that can operate in two domains, muddying the nomenclature.  In the past year, several prototype multi-domain unmanned vehicles have been introduced.   CRACUNS The most popular combination of these hybrid drones is the air/sub-surface mixture - UAVs that float or swim.  Johns Hopkins University Applied Physics Laboratory in Laurel, Maryland introduced t he Corrosion Resistant Aerial Covert Unmanned Nautical System ( CRACUNS ), a submersible UAV designed to operate in the littorals which can be launched from a fixed position underwater or from an unmanned underwater vehicle (UUV). Rutger University's entry into the fray of flying/swimming drones is the Naviator , which can actually maneuver (sort of) underwater before surfacing and taking off.  Naval
1 comment
Read more...
More posts