The Future of Sea-Air Drones and Protecting Maritime Assets 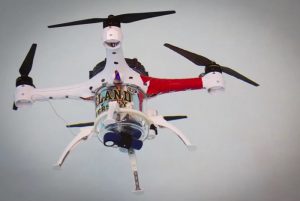 By Jack Whitacre What are some of the ways the U.S. and other countries could defend maritime assets against swarms of Sea-Air drones? Consider a convoy system with human centered technology, algorithms from nature, and elements of gaming. Oakland University’s Loon Copter works equally well above and below the water’s surface. Photo: Oakland University The FAA estimated that one million drones would be sold during this 2015  holiday season . This estimate was based primarily on the proliferation of flying drones, however new domains of operation may open up soon. Premiering in 2015, the  Loon Copter   proves that, in time, these devices will be capable of traditional aeri al flight, on-wa ter surface operations, and sub-aquatic diving. Embedded Systems Research at Oakland University created the Loon Copter in 2014. In 2016, the design placed third in the  UAE Drones for Good competition . The system works in air as well as in water because the four rotors balance and cut throug
1 comment
Read more...
More posts