The Navy currently has a number of Unmanned Maritime Systems (UMS) that perform a variety of missions including mine countermeasures, maritime security, hydrographic surveying, environmental analysis, special operations, and oceanographic research. While these unmanned systems were rapidly developed and fielded to meet immediate warfighter needs, some of the systems have not been subjected to the normal cost reviews associated with programs of record and in many cases the data required to develop rigorous cost models is limited or unavailable. As a result, the total ownership cost of unmanned maritime systems is not well defined, particularly the costs associated with operations and support.


Dr. Diana Angelis and Mr. Steve Koepenick from SPAWAR have been working on a CRUSER funded project to better understand UMS lifecycle costs with an emphasis on the operations and support costs associated with unmanned underwater vehicles (UUV). The first phase of the project brought together subject matter experts from various UMS programs in a warfare innovation workshop held at NPS in March 2015. The workshop participants identified several cost drivers of UUV O&S costs including fleet size, energy requirements, availability, security requirements (including cyber security), and training and retention.

Each of the major cost drivers was further decomposed into the system attributes that influence the magnitude of the cost driver. For example, energy is a function of: 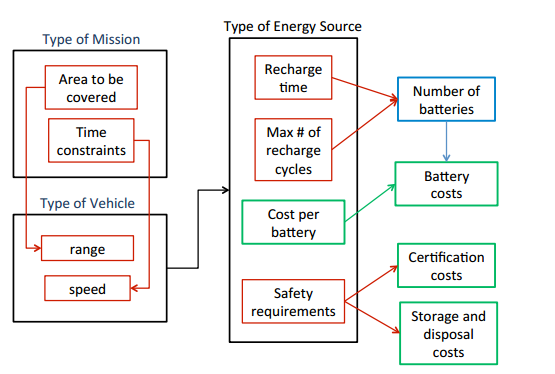 An influence diagram for energy costs is shown above. This will form the basis for further research into the factors that drive energy cost for UUVs.

The next steps are to collect data and build regression models that will quantify the relationships between the factors identified in the workshop and UUV O&S cost categories. When fully developed, these models can be used by program offices to forecast UUV O&S costs in support of analysis of alternatives and budgeting decisions.

Participating in the workshop were several NPS students, including four distance learning students in Systems Engineering. These students decided to use the findings of the workshop as a basis for further research in their capstone project. The capstone project will employ an array of systems engineering methodologies to investigate the specific UUV cost drivers associated with two unique mission types and explore the effect of mission requirements on O&S costs. The team has been working with PMS 408 and PMS 406 to develop point estimates and distributions for relevant O&S cost elements of the life cycle cost model. The project is expected to be completed in March 2016.