By Naval Drones - December 04, 2013
Earlier this week, guest blogger Mark Tempest posted some interesting ideas on low cost alternatives to traditional combatants which could be configured to carry unmanned surface vehicles, playing on the idea that payload truly is more important than platform.  These concepts are unorthodox, though as Mark points out, not unprecedented.  In a time of shrinking budgets and smaller fleets, the navy should explore how to optimize various combinations of ships and the unmanned vehicles they will carry, with an eye towards both effectiveness and efficiency.  Mine counter-measures is an important, though often short-changed mission, with various trade-offs between payload and platform. 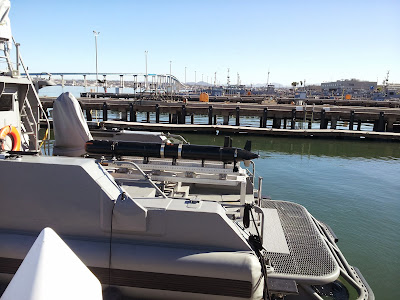 Between the Littoral Combat Ship "seaframe" and mission modules, the U.S. Navy has invested billions of dollars in R&D and acquisition money to develop (though still not fully) the capability to conduct off-board, unmanned mine counter-measures.  LCS will carry the Remote Minehunting System, a rather large, complex, diesel-powered snorkeling vehicle which has been under development for about two decades.  RMS is designed to tow a side scan sonar in order to detect mines.  Contrast that arrangement with the Coastal Command Boat, pictured here with an embarked Kingfish, an unmanned underwater vehicle which essentially performs the same job as the RMS with its synthetic aperture sonar. The CCB, or the follow-on MK VI patrol boat can carry two of these UUVs.  A well deck equipped amphibious ship (LPD, LSD, LHD) could be configured to carry multiple MK VIs, resulting in the ability to rapidly deploy several UUVs over a wide area at any given time.  Additionally these patrol boats, or as Mark suggests, another Craft of Opportunity, could be forward deployed or prepositioned in various overseas ports, including ones too small or too politically sensitive to station a larger combatant.  An LCS can bring an MCM capability to a mine field at 40 knots, much more rapidly than dedicated MCM ship.  A C-17 with patrol boats and a UUV Det can transport MCM package at 10 times that fast.  Certainly there are other trade-offs in capability, cost, and versatility in all these options.

Given these emerging MCM alternatives, future fleet experimentation to identify other payload/platform configurations that can achieve the same operational results as the LCS/RMS package in a more affordable manner is certainly warranted.  Because of the relatively low cost involved in these platforms and UUVs, the answer doesn't have to be all or none and more than one alternative can be pursued without breaking the bank.
Kingfish LCS Mine countermeasures motherships RMS