By Naval Drones - March 04, 2013
Navies and Coast Guards aren't the only organizations using unmanned air systems for maritime surveillance operations.  Drones in marine wildlife protection roles are a fast growing trend.  UAS offer several advantages to these operations.  First, they are much more affordable than manned aircraft, something that is important to non-profits on a budget.  The UAVs are also quieter than helicopters or aircraft, a critical advantage to not spooking the animals being protected and the poachers who are being monitored.  Finally, small UAS are easily and cheaply transportable to austere locations. Here are several examples of this growing trend: 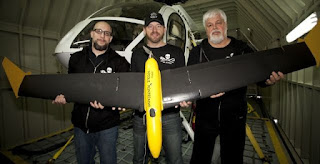 In 2010, the Sea Shepherd Conservation Society used an Osprey UAS produced by Hangar 18 for the first time in their Southern Ocean whaling protection campaign.  This summer's fleet of four ships has deployed to Antarctica with three drones and the aircraft have already been successful in finding the Japanese whaling fleet.

In the summer of 2012, Sea Shepherd's ground-based arm, O.R.C.A. Force, deployed to Namibia.  The team managed to capture video footage from their UAVs of illegal hunters at the Cape fur seal reserve.

Since 2011, Embry-Riddle been teamed with the Universidad San Francisco de Quito (USFQ) on a conservation project which will work in conjunction with Ecuador's Navy. As many as 30 autonomous Piquero UAVs will patrol the Galapagos islands to protect sharks from poachers for up to 16 hours at a time.


Likely as a result of past success with UAS wildlife conservation, Sea Shepherd/O.R.C.A. veteran, Laurens de Groot and partner Steve Roest have founded a non-profit organization, ShadowView, to supply UAS for other groups engaged in conservation, search and recovery, and infrastructure monitoring.  ShadowView will be launching a Mediterranean Sea campaign to be announced later this month.  Stay tuned.