Sea-Based Drones & the Future of Counterterrorism

By Chris Rawley - December 02, 2012
In a recent Washington Post editorial, Kimberly and Frederick Kagan take a solid position on why the U.S. should maintain a troop presence to support counterterrorism operations in Afghanistan post-2014. The bulk of their argument for continued U.S. ground deployments revolves around the tyranny of distance’s impact on future counterterrorism (CT) operations against the al Qaeda (AQ) network:

North Waziristan is more than 600 miles from the nearest coastline; the other sanctuaries are farther. The U.S. Air Force reports that armed Predator drones have a range of about 1,150 miles - not enough to get to Waziristan and back again from the coast, much less to orbit and observe a target. Special mission units would have to parachute from transport aircraft because no helicopter in the U.S. inventory can fly that far. But they could not return because aircraft cannot land in the mountains of Eastern Afghanistan or in Pakistan. Manned aircraft can drop precision weapons on targets in Afghanistan, but they fly too fast to loiter over potential targets. Their bombs hit precisely what they are aimed at, but fast-moving aircraft cannot ensure that the target was actually there. There is no over-the-horizon solution to targeting terrorists in South Asia.

There are nuggets of truth in this supposition, but the authors’ assumptions do not take into account future planned capabilities. The Kagans correctly point out that range constraints on current Predator models make operations from offshore problematic. More to the point, none of these aircraft can operate from sea-based platforms. Current unmanned aerial vehicles (UAVs) operating on U.S. Navy ships include Boeing’s ScanEagle and Northrop Grumman’s MQ-8B Fire Scout. Neither of these UAVs has the range to conduct intelligence, surveillance, and reconaissance (ISR) into terrorists sanctuaries well inland, and neither is armed.

It should also be noted that although special operations "night raids" killed America’s number one enemy in Pakistan and have staved off a resurgent al Qaeda presence in Afghanistan, the bulk of today's counterterrorism operations against the remaining AQ core involve deadly-effective drone strikes in the FATA.  Kinetic strikes from manned and unmanned aircraft also continue aggressively in Eastern Afghanistan.  It stands to reason that these attacks will make up the preponderance of our efforts against AQ militants in the region, regardless of the continued U.S. force presence in Afghanistan.  Despite much uninformed commentary to the contrary, the efficacy of these lethal operations is indisputable, especially in the eyes of the enemy.   In January 2011, al Qaeda Pakistan spokesman Ustadh Ahmad Farooq provided just one of many admissions of this fact when he said, "there were many areas where we once had freedom, but now they have been lost… We are the ones that are losing people; we are the ones facing shortages of resources. Our land is shrinking and drones are flying in the sky."  Still, as long as instability and a violent strain of Salafist jihadi ideology plagues the region, there will be opportunities for a resurgent AQ safe haven in South Asia.  Close monitoring and CT pressure will have to be maintained for the foreseeable future to prevent further plotting against American interests.

Given a reduced capability after 2014 to base unmanned ISR and manned strike aircraft in Afghanistan, alternatives to ground-dependent ISR basing should be pursued.  First though, some general information on on these operations.  In addition to various sensors, airborne counterterrorism platforms require two primary characteristics:
* Endurance - It takes time for dedicated intelligence collection - usually days or weeks, not hours - to locate targets and additional time to "fix" the target, meaning to meet various pre-established criteria such as a low collateral damage environment. Therefore, non-stop ISR coverage is an absolute necessity. Longer distances from launch and recovery bases to target areas require additional (or faster) aircraft to maintain a persistent over-watch.
* A means to "finish" the target - Neutralizing a target can be done from a platform other than the one collecting ISR; with options including tactical aircraft, cruise missiles, or special operators on the ground. However, when targets are fleeting and economy of force is required; having a means to finish the target (i.e. weapons) on the surveillance aircraft itself is often the best option.
As noted, current naval capabilities fall short of the endurance and weapons necessary to launch strikes from off the Makran coast. That said, the Navy has maintained an on and off carrier presence in the Indian Ocean for combat air support in Afghanistan from tactical aircraft (F/A-18s) for over a decade. The recently-publicized X-47B or another aircraft under consideration for the Navy’s Unmanned Carrier Launched Surveillance and Strike (UCLASS) program could provide a viable alternative, or at least complement, the land-based aircraft executing counterterrorist strikes.   The Navy has taken a very deliberate approach to testing and acquiring this platform, and unmanned carrier surveillance/strike aircraft are not planned to achieve operational capability before 2020. 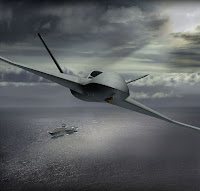 The requirement to conduct long-ranged, sea-based counter-terrorism operations might be a reason for the Navy to consider accelerating this cautious approach.  One shouldn’t trivialize the complications of fielding these aircraft onto carriers, but there is ample precedence for test and evaluation efforts leading to a rapid unmanned combat capability. For example, General Atomics' Predator and Reaper strike aircraft and their associated infrastructures have been combat-tested for more than a decade after they were quickly surged to battlefields in Iraq and Afghanistan following a high demand from war-fighters. Interestingly, General Atomics has also introduced an armed, carrier-capable jet-powered Predator variant, the Sea Avenger, which has avionics and control systems in common with its widely-fielded sister aircraft.
The exact make-up of manned and unmanned squadrons in future Carrier Air Wings has yet to be determined.  Certainly, an embarked squadron or two of very low signature aircraft like the bat-winged X-47B could provide a robust day-one strike capability against a nation state with complex integrated air defenses.  But for longer term missions such as servicing ground targets once air superiority has been achieved or conducting persistent reconaissance operations as previously described, a plane like the Sea Avenger may be a better (and likely, more affordable) fit to complement manned aircraft in the air wing.  Despite the distances described in the Kagan article, a 12-plane squadron of Sea Avengers operating from a carrier in the Indian Ocean should be able to sustain more than three ISR orbits (each representing 24 x 7 coverage over a single target area) in Pakistan or Afghanistan.  With tanking, an X-47B squadron might achieve similar rates.  This number pales in comparison to the dozens of ISR aircraft currently flying in Afghanistan, but many of these orbits are soley devoted to force protection of ground troops.

Nothing can substitute for the fidelity troops on the ground bring to a fight.  Though regardless of the eventual U.S. troop count in Afghanistan, airborne CT operations will remain critical.  As the Kagans note, logistics are equally important.  Maintaining air operations with a smaller U.S. footprint will require more aerial resupply and less reliance on fragile supply chains through contested territory.  In addition to expected domestic and international political friction over the future of U.S. force presence in Afghanistan, airfields there are under increasing pressure from enemy action.  Basing can be rendered unusable or even lost for any number of reasons; sea-based air will mitigate risk to these operations in the future.

The Navy should begin planning now to augment land-based ISR and strike aircraft with sea-based drones.The introduction of long-dwell unmanned ISR to carriers will also bring a powerful reconaissance capability to complement existing strike assets. As an added benefit, basing more attack-capable ISR at sea provides operational flexibility and strategic surprise. The same long-range strike launch and recovery capability that might hunt AQ in the FATA can be rapidly relocated to the coast of Africa, Persian Gulf, or anywhere else sustained ISR presence might be required to find, fix, and finish terrorist targets or support major combat operations. Most importantly, repositioning these floating ISR airfields would not involve complicated diplomatic kabuki to secure or retain basing rights.

The author is a counterterrorism planner.  The opinions and views expressed in this post are his alone and are presented in his personal capacity. They do not necessarily represent the views of U.S. Department of Defense, the US Navy, or any other government agency.
counterterrorism Fire Scout ScanEagle Sea Avenger UAS UCLASS X-47B